Bit-Tuner has now produced a deep techno remix from the sounds he contributed to the «Delivery for Mr. Rajab» video installation in the exhibition at Helmhaus Zurich.

The ongoing work «Delivery for Mr. Rajab» is a collaboration between Julian Assange & !Mediengruppe Bitnik where we sent multiple parcels with a hidden camera to Bahraini human rights activist Nabeel Rajab. The parcel's camera recorded the journey through the postal system in real time and shared the images online.

Bit-Tuner (1978) lives and works in Zürich, Switzerland. He's been producing electronic music with computers, mpcs, synthesizers, bass guitars and a fleet of analogue effect gear. He has a fondness for samples from old records, movies and has also been discovering field recording lately. 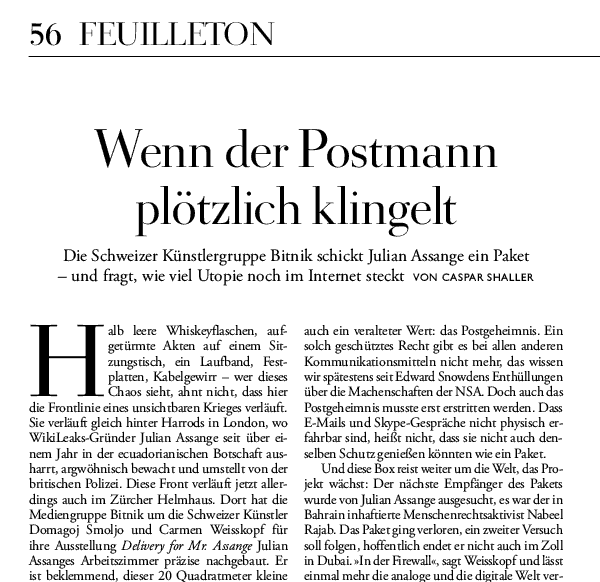 «Delivery for Mr. Assange» is a 32-hour live mail art piece performed on 16 and 17 January 2013. On 16 January 2013 !Mediengruppe Bitnik posted a parcel addressed to Julian Assange at the Ecuadorian embassy in London. The parcel contained a camera which documented its journey through the Royal Mail postal system through a hole in the parcel. The images captured by the camera were transferred to Bitnik's website and the Bitnk Twitter account in realtime. So, as the parcel was slowly making its way towards the Ecuadorian embassy in London, anyone online could follow the parcel's status in realtime.

The video shows the twitter feed and the live camera images from the parcel.